Reviewing My Memories Of More Mobility and Manhattan 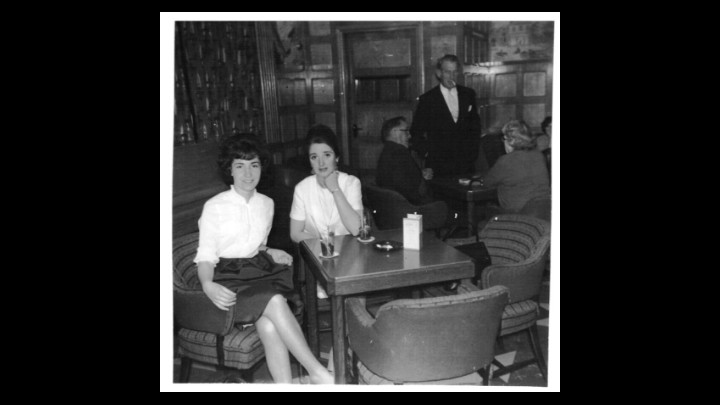 Last time I blogged about my time in the United States was about my very early days there and the Cuban Missile Crisis. Time to bring it more up to date, I think.

The Peters who I worked for had arranged for me to have driving lessons. Dad had tried to teach me a few years previously until one day when I hit the accelerator instead of the brake and ended up in someone’s front hedge so I was more than a little worried about how I would cope with proper lessons. It was around 1962.

I was to learn in a car with manual gear shift because the car I would be driving was a Volkswagen Beetle. Once I passed the test, I would also be able to drive the big automatic Plymouth Estate car if I needed to and did so on occasions. The driving lessons, together with practice runs with Mr Peters, who was very patient with me, in the Volkswagen, went very well and I had soon passed the theory test. (At that time, there was no theory test in the UK.) The American practical test is nothing like the UK test, in which drivers are tested in actual town/city situations; the American test consisted of manoeuvering the car in make-believe situations on an away-from-it-all test site but including, importantly, parking in a limited space. I found that part of it easy compared with a British test.

I can’t remember how long it was before I got my US Drivers’ License but I don’t think it was very long, certainly no more than 8 or 9 weeks from the time I had landed. When I passed my test, I was jubilant, a feeling which quickly turned to fright when the Peters said I could now drive on the road – on my own. I had made arrangements to go into Princeton that evening but when I asked if I could call a cab to get into town they told me to use the Volkswagen Beetle instead. I could not believe that they trusted me to go out on the road so soon after passing my test, especially as the test hadn’t been in a real town/city situation. I managed it though my hands were shaking with fear on the steering wheel to begin with.

The breakthrough in my social life had come about because I had been introduced to Linda, another mother’s helper, whose yard (what Americans call their gardens) adjoined the Peters’ yard and whose children played with their children. She had been there about a month longer than me and hated it. Her people weren’t like the Peters. Linda’s people were somewhat brash and overpowering. What’s more, they did not believe in disciplining the children. The kids were more or less allowed to do just what they wanted, when they wanted so that poor Linda was run off her feet. Unknown in the UK at that stage, they were allowed to pick and choose what they wanted to eat; again this involved Linda in cooking different things at mealtimes for, in her case, six children. Up till my arrival, she hadn’t been out much either and was nearly driven to distraction.

Mrs Peters suggested we go to a dance being organised by the Princeton International Club in the YMCA building. They figured it would serve as some kind of introduction to a social life with people of a similar background. Accordingly, Linda and I got a cab into Princeton (this was before I had passed my driving test) and somewhat apprehensively paid our entrance fee. There were all nationalities there, Swedish, German, French, even the odd Brit or two, one of whom I became quite friendly with later, a bloke called Barry. Truth to tell, they weren’t a very lively bunch and we were a bit bored. That is, until a few students managed to inveigle their way in. And that was how I met Rick.

He was tall, with fair hair, of athletic build and he flirted outrageously with me, though he was only around twenty to my twenty-three. Linda found herself being treated in the same naughty, but nice, way and we were soon laughing uproariously, much to the disgust of some of the more staid members of the International Club. We made no firm arrangements to meet again but were advised to go into Fenwick’s Coffee Shop, which was the hub of much student activity and definitely the place to be seen. Linda and I went home feeling we were on the verge of a breakthrough. 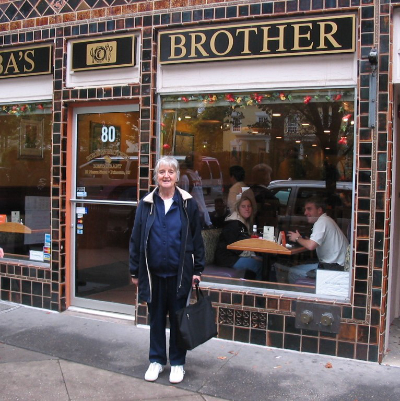 2004 photo outside what used to be Fenwick's Coffee Shop

A few nights later, we took another cab into town and went into Fenwick’s, not knowing what to expect. It was, without doubt, a revelation. We’d no sooner sat down and ordered our coffees than we were being chatted up. Guys would come and plonk themselves down and ask outright for our phone numbers. I found later that even if you were in there with a date, a friend or even just an acquaintance they would demand to be introduced, then ask for our phone numbers. Rick and his friends came in that night and he made a beeline for me. What’s more, he stayed, which is more than the others did, drifting backwards and forwards as they did.

I ended up going out with him a few times but it was never serious. As soon as the novelty of a limey date wore off, he drifted on to someone new. But Rick served a purpose; he was my intro into the world of the students, so many that I can’t remember all their names, almost all of them younger than me.

Through the students and attending various parties, we were introduced to other girls working as mothers’ helpers and Linda and I built up a good circle of friends. It helped too, once I had use of the Volkswagen, it gave me so much more freedom.

On the voyage over, I’d become friendly with a young woman about my age who was doing the same as me, working as a mother’s helper. Gill was to be based in Rochester in New York State about the same distance from New York City as me but in the opposite direction. Anxious to keep in touch, we arranged to meet in Manhattan about once a month on our days off. The first time this happened was about a month after we’d arrived. The journey by bus took about an hour and Gill met me at Port Authority Bus Terminal. She’d already been into the city several times so was familiar with the bus system. They simply travelled either across town or uptown and downtown. The street grid system, with numbers instead of names, seemed blindingly simple, if a little impersonal. Only the older streets, such as Wall Street or Watt Street in downtown Manhattan had street names. Broadway wasn’t simply a street close to Times Square and the theatre district, it ran further uptown and down to Greenwich Village.

On our regular trips to the city, we made sure we saw all the tourist attractions, the Empire State Building (scary ride to the top!), the RockefellerCenter, Central Park, usually ending up the day having a meal in some bar somewhere. One of the places we visited was the Peppermint Lounge, thebirthplace of the Twist, the dance craze that played havoc with the knees. Chubby Checker was first credited with starting the craze with his records ‘The Twist’ and ‘Let’s Twist Again’. In the bar’s heyday, it had reputedly been immensely popular with celebrities flocking there but when we visited, it was typical Manhattan bar, long and narrow, with separate booths, subdued lighting and no music.

How improbable it all sounds, living the quiet life that I do now, to believe that I regularly went to Manhattan on my days off!

Lead image is of my friend Gill & I aboard the Sylvania. 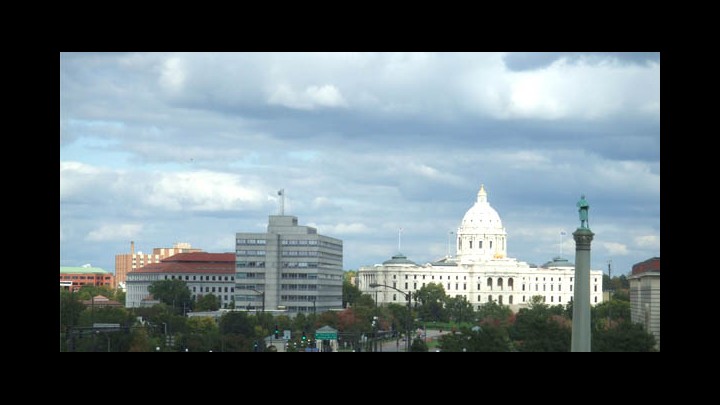 Minnesota The Beautiful - Home of Lake Superior and Bob Dylan

When you think of the USA, which locations immediately spring to mind? New York City, Florida, California, Las Vegas? Yes, I think of all those, too!

My Visit To Graceland

Since the age of 13, in 1959, I have been an ardent fan of the wonderful singer Elvis Presley.