WITCH: A Circle Of Spears production By Tracey Norman 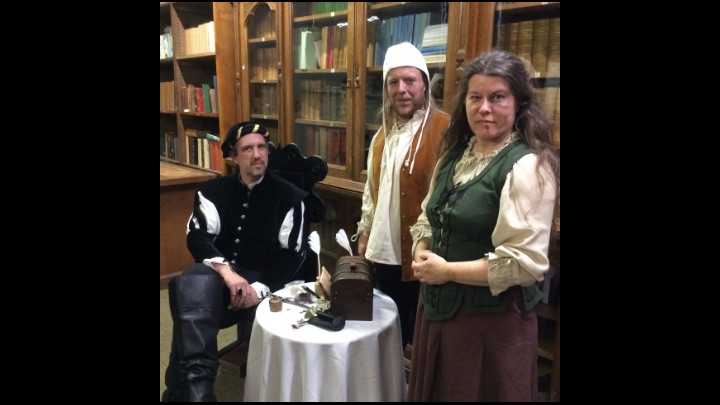 Tracey Norman, who both wrote and stars in WITCH, whooped with delight when I told her she’d made me cry with her performance as Margery Scrope. “That’s the correct reaction,” she told me.

WITCH is a play about a woman accused of witchcraft. But there’s no witchcraft in the play; and it’s not set in a courtroom. It’s a subtle three-hander, neatly moved to a location that gives a voice to all three characters, particularly the aforementioned Margery Scrope. The characters are fictional, but all the incidents portrayed are taken from transcripts of actual witch trials. It is a play about social justice, prejudice, and mass hysteria; and shockingly, the issues it deals with are as relevant in today’s second Elizabethan era as they were in the sixteenth century.

Tracey Norman’s performance was so powerful that not only the audience, but also the actors, were visibly moved. Her fellow actors were equally excellent in their roles: Sam Burns as her accuser, Thomas Latimer; and Mark Norman as Lord of the Manor, Sir William Tyrell.

This is a short piece, running for less than an hour. Written in 2016, it was originally intended to run for one season only, but three years on, it has been performed more than sixty times. This setting, in a small book-lined room in Torquay Museum, was perfect, and the audience of nearly forty was completely entranced; everyone stayed for the question and answer session afterwards.

Circle of Spears Productions are a team of trained actors and former TV industry professionals. They produce both audiobooks and live theatre events. If you get the opportunity to see WITCH, then do make sure to get your ticket. And if you are looking for a short, thought-provoking piece of theatre for a festival programme or other such event, then do give them a shout: www.circleofspears.com/witch.