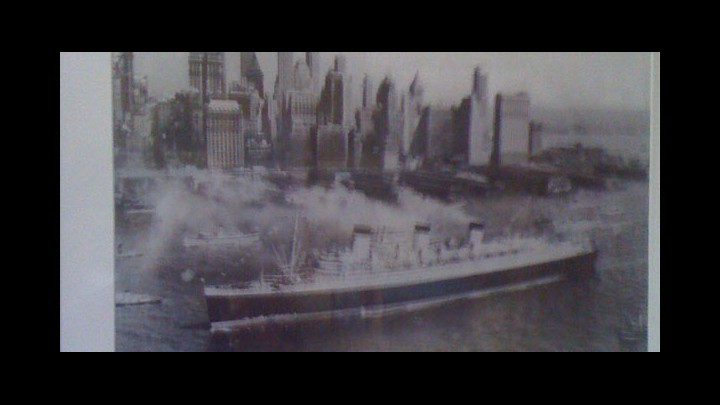 When I was twenty four, I wanted to get away from home.

Having come from a sea faring family, I wrote to the Cunard Company and said I would like to work for them as a hairdresser on board one of their liners and asked for an interview. Could they please make it on a Wednesday afternoon, my half day! I did mention my uncle's name as he was one of their executive chefs and I thought it might help my case.

I did mention my uncle's name as he was one of their executive chefs and I thought it might help my case.

A few days later I received an invitation to be interviewed in their office. I was delighted. The lady superintendent was a fearsome creature who questioned me vigorously about my work, my reason for wanting the job....to travel I told her...then gave me a lecture about not going out with any of the married men on board as she didn't enjoy wives ringing her saying one of her girls was having an affair with their husband! I assured her it was not a habit of mine. At the end of the interview she offered me the job in the Beauty Parlour of the Queen Mary, sailing in two weeks time!

This was the beginning of seven years spent at sea, which were some of the happiest days of my life.

The Queen Mary and the Queen Elizabeth were the two mayor liners travelling to New York at the time. There were three Beauty Parlours on board. One in First Class, one in Cabin Class and the third in Tourist.

This was in the mid fifties, just before Trans Atlantic flights began; therefore we carried movie stars, millionaires and wealthy VIP's among our passengers as well as the hoi polloi in Tourist. There were segregation gates which kept everyone in their designated classes.

I read in the papers recently of the death of Joan Fontaine which saddened me as she had been a client of mine on one trip. A small delicate creature with long blonde hair who was very quiet and unassuming, then there was Rosalind Russell, who was quite the opposite. Tall, elegant, who swept into the Beauty Parlour with great panache. Michael Wilding would pop in to see if his wife was ready and in the barber's shop, Michael Redgrave was buying a razor. Along the alleyway one day I saw Judy Garland with Liza when she was a small child.

Zachary Scott was travelling with his wife whom I had attended and she booked a manicure for him. Fabulous! Fascinating man, with moody good looks and dashing smile. He was coming over to be in a play in London.

I asked him if he minded always playing the part of the baddy. He laughed and said,'No, they always get the best lines!'

Jeff Chandler was travelling one time and used to go to the Turkish Baths every day and I asked one of the masseurs to get me his autograph. The following day I answered the phone at the reception desk to be told by the masseur he'd got a signed photo for me and that Jeff Chandler wanted to talk to me! This American voice came on the phone.

'Hello June!' Well I have to tell you my knees buckled from under me with shock. He thanked me for asking for his autograph and we had a nice chat. When I put down the receiver I kicked myself for not suggesting he have a manicure! I could have held hands with him for half an hour!

Another time we had a millionaire travelling who was a regular passenger who wanted to take me to Australia with him for three weeks, saying I fascinated him. 'It would do me the world of good and you no harm, June,' he said. The nicest proposition I'd ever hand and in case you're wondering...I said no!

Eventually the flights to New York took over as people could get there in hours as opposed to days and the passenger numbers slumped. It was a pity. The Queen Mary was a beautiful ship, not a floating hotel that present day ships seem to be. My father had been on board on her maiden voyage and above my desk I have a large framed picture of the Queen Mary entering New York on that very voyage.

Three and a half years later I was transferred to the Mauritania to go cruising for six months of the year. I'll tell you about that another time.

EDITOR: Link to next article here.